So my phone (a Nokia E62) has been flaky for several months. ( Collapse )

So, the short of it is that you shouldn’t rely on me seeing voicemail or text messages in anything like a timely fashion, or being able to tell when you’re calling. It does still vibrate, but I often don’t notice that if I’m driving or on the T, and never notice it if the phone isn’t actually on me at the time.)

I have my old phone which I got back from

cathijosephine when she bought a new phone, but I can’t find the charger for it (I know I have one; just can’t find it) or the data cable (don’t know whether I kept it or not), and since the main thing I use my phone for is internet access from the T, which requires the data cable, I’m going to keep limping along with my current phone until I can find or replace the data cable for my spare phone.

What I really want is the announced but not yet released Nokia E71, but I don’t know pricing and I don’t know when it’s going to be available in the US, so I may need to just replace my current phone.

(As a side note, I will be so happy in a couple years when my phone runs Linux and I can just sftp or rsync all my data off it. As it is, I haven’t found a way to get my text messages off the phone, so I’m probably going to lose all my LOLspeak lovenotes from

plumtreeblossom when I switch phones.)

bbbsg was the subject of an article in yesterday’s Boston Globe. Here’s the article. It’s mostly about her decision to have her foot amputated (a prosthesis would give her more mobility and less pain), but it fits with the subject of this post because it also talks about her skills in “circus arts” — namely silks, although the article doesn’t say so. (I am really bummed I didn’t get a paper copy yesterday; I meant to, but I forgot. The physical edition has a picture of her on the silks. Anybody have a spare copy of Monday’s Globe?)

roozle’s Beginning of Summer party (awesome, as they always are), I took a bunch of photos of firespinning. Here they are, on Flickr. (If you’re in them and would like to be credited, let me know which photos — I could only recognize two and maybe three people in them — and how you’d like me to credit you. If you’re in some of them and would like them removed or Friends-and-Family locked, of course, just let me know!)

For those of you who haven’t seen this in person, while it’s pretty gorgeous in photos, the trails seem very different in person (they don’t start and end abruptly the way they do in photos, of course, but are part of one long trail from the flame lighting to the flame going out), and because the eye can’t catch the subtle detail and texture in the flame the way the camera can. So while I love firespinning photos, they feel more like art than like representation to me. Here’s an example: 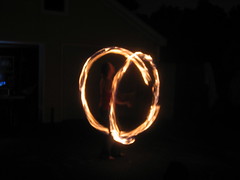